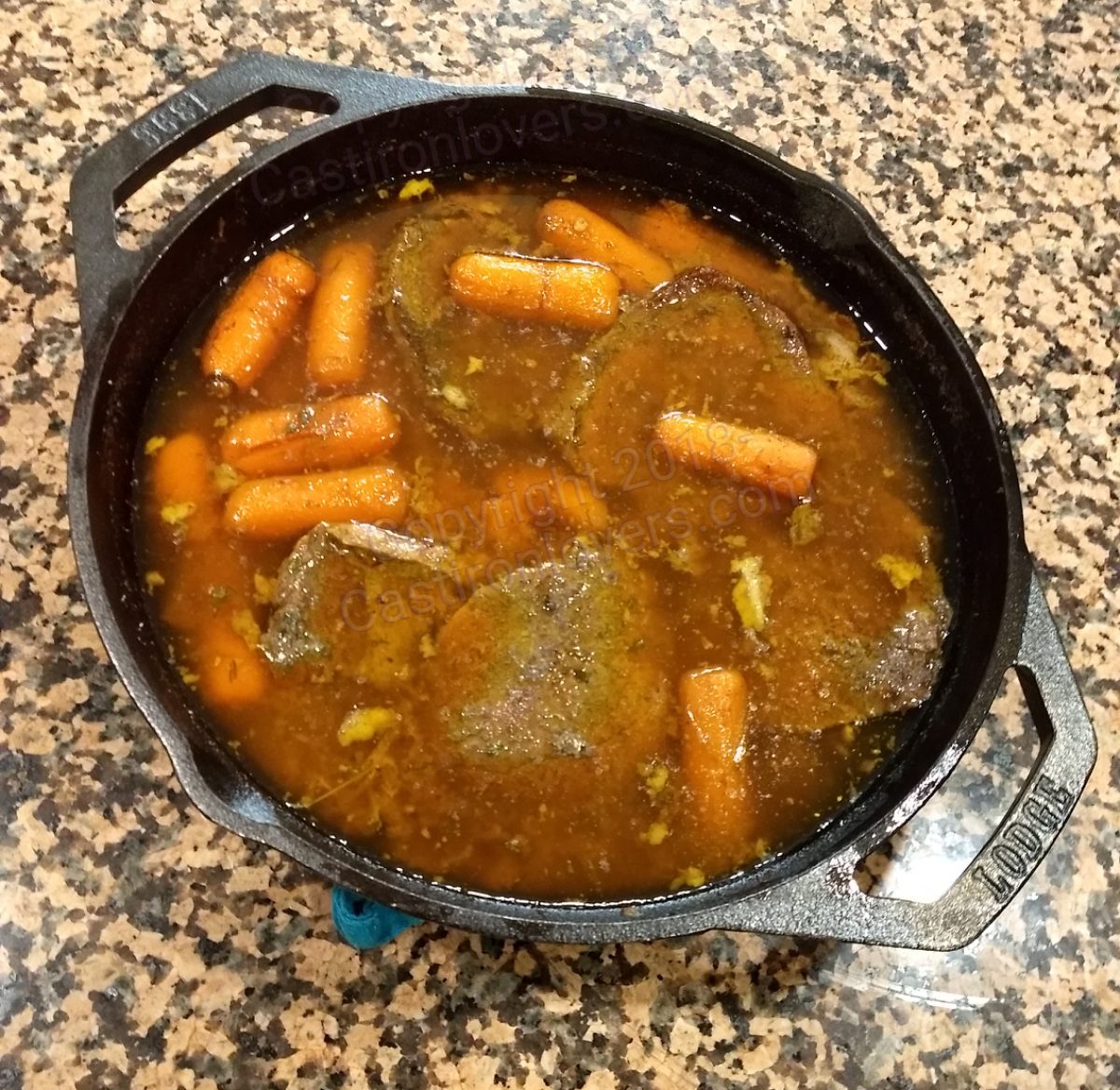 So, Should You Own A Cast Iron Cookware?

With a plethora of selections and designs, you can’t help but wonder should you own one ; cast iron cookware is a must have for most avid cooks…. But  is it the right cookware for you?

Well, the answer to this question all depends on what you will be making in your kitchen. If you are someone who mainly prepares vegetables and raw foods, then it is highly unlikely that you will need to use your cast iron cookware on a regular basis. Therefore,  owning a cast iron cookware may not be for you …unless you just enjoy collecting them.

Now,  for those who love their vegetable stir fries, and or pan-searing steak, then owning a piece of cast iron cookware could prove very useful, especially something like this.

Benefits of Cooking in Cast Iron

From a health perspective, cast iron cookware is a fantastic way of increasing your iron intake, especially, if you are iron deficient.

Even if you aren’t anemic, you can still benefit from a little boost in your iron levels as a lot of people nowadays have iron levels that may fluctuate due to diets that are nutritionally lacking.  Plus, the amount you of iron that gets transferred to your food in most cases will not significantly affect your health in a negative manner (all other factors and medical preexisting conditions and circumstances considered).

What will It Cost?

Cast iron cookware can range in prices and depending on your budget, it can put a dent in your wallet. So, is up to you what you can afford or decide to splurge on.

There are now cast iron pieces that range from $14 for a regular size skillet (a 10 inch diameter skillet, for example), all the way up to a little over $200 for a single cookware.

Whether you want to spend upwards of $200 on a piece of metal is really up to you. But you can rest assure that you will never run out options as to what to cook in your cast iron pot(s) and or pan(s). So, definitely get cooking!

New to Cast Iron? No Worries

Now if you are just now getting into cast iron cookware I would suggest that you start small. Preferably, with a skillet or a small Dutch Oven.

Once you have grown accustomed to cooking with and caring for your skillet or Dutch Oven, you can then graduate to other types of cast iron cookware.

Now, cast iron can be a bit challenging to get used to in the beginning. This is because cast iron is bare metal that can oxidize if not properly cared for.

By starting off with a reasonably priced cookware such as Lodge’s 10″ skillet, you will get a feel for what it takes when it comes to caring for cast iron.

However, if you find the efforts of caring for your cast iron to be cumbersome, then by all means do NOT go splurging on a 100 plus dollar skillet or cookware just because it looks pretty or because you feel you can find uses for it (eventually…). The same care that is required for your $10 skillet will pretty much be the same care you will need to implement for that $100 or $200 skillet (…and not a lot of people want to do that or care to…).

Where most newbies go wrong when it comes to cast iron is they fail to realize that the metal is not indestructible when it comes to water. In other words, there is no permanent protective layer or treatment there right of the bat. Especially, when you have been used to cooking with stainless steel or teflon coated pots and pans or even enameled pot and pans.  All of which have been coated for easier use and care.

More on Why You Should Get A Cast Iron Cookware

There is just something about using iron when it comes to cooking…it just seems to elevate the flavor. Its abilities of heating up well, gives your food just the right kind of searing that produces a lovely caramelized flavor that takes your taste buds to another level. Even the toughest of vegetables can be seared or stir fried to absolute perfection.

Whether you cook just for the love of cooking or you are being paid to show the world your skills at making the most delectable dishes, your cookware is an integral part of the job done.

Nothing sears a juicy steak quite like a good ‘ole seasoned piece of cast iron. A lot of seasoned chefs have a least a couple of cast iron pieces they utilize for a selection of their signature dishes and it certainly makes a world of difference!

If you have ever had the pleasure of owning a well seasoned piece of cast iron cookware, then you can understand the fascination with some of the most recent and most coverted cookware. There is Field, Stargazer’s; Finex, Lodge’s cookware to choose from just to name a few. All of which possesss their own perks and flaws.

What are My Options Besides Bare Cast Iron

Consider purchasing at least  one or two enamel cast iron cookware for cooking dishes that are too acidic and any foods that will react with bare cast iron or inadequately seasoned cast iron. Especially for dishes that you know will have their taste altered while being cooked or baked in cast iron, certain foods like spaghetti sauce, certain deserts for example, etc.

You should also consider enamel cast iron pots if you would prefer to not keep up with the maintenance that comes with cast iron cookwares. In other words, seasoning and re-seasoning, as well as, certain restrictions that may apply to cooking with cast iron.

These stainless steel chain scrubbers (otherwise known as chainmail scrubbers) are great for cleaning off stubborn baked in food particles. Great for use with stainless steel pots and pans, as well as, cast iron cookware and bakeware such as the one pictured in the video below. Everyone knows that cast iron is notoriously hard to…

Takoyaki is a Japanese based Street food that when prepared well can bring extreme flavors together that are sure to delight your tastebuds. This Japanese originated snack is more or less an octopus meat filled dumpling soft and crispy and rolled in one. The soft meat in the center makes for a delicious and flavorful… 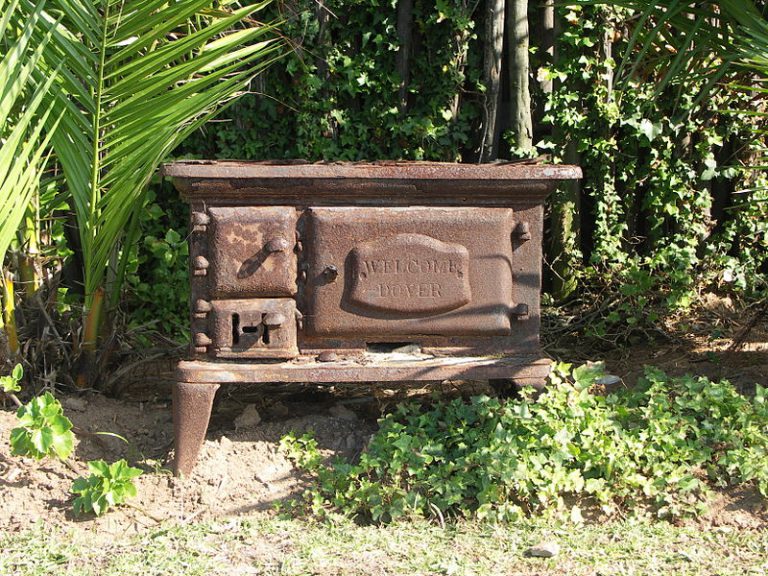 Cast iron stoves are an energy-efficient and great way to cook, especially if you have an outdoor kitchen. But they also make for a great addition to your indoor kitchen as well. Continue reading for more information on cast iron stoves and why you should get one.   Will a Cast Iron Stove Fit in… 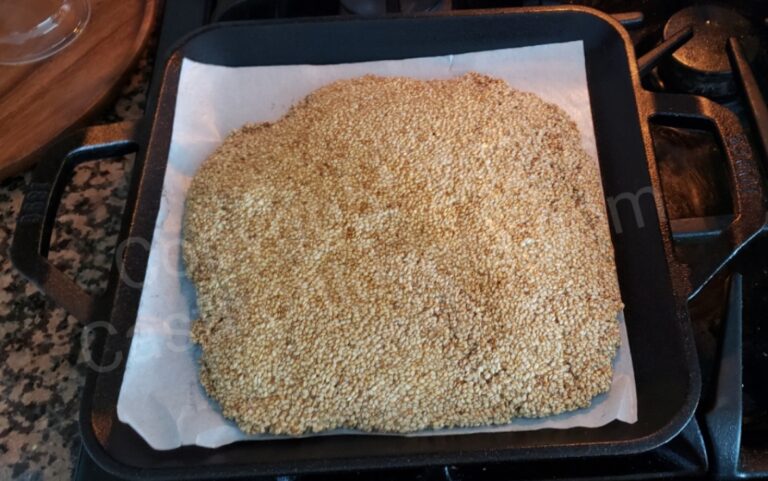 Today we are sharing with you all our version of this Sesame Brittle Snack recipe adopted from the site referenced below. This is a delicious treat to have every now and then in place of candy and it provides the added benefit of nutrients provided by the sesame seeds. We really enjoy this snack and…

Looking for a hearty breakfast egg omelette recipe, then look no further, because we have come up with one of the best egg omelette recipe for you to try using your favorite cast iron pan. It is great for indoor cooking because you can easily pop it in the oven. Or, if you would like…

Cast iron pans are a beauty to behold and can prove to be very durable if taken care of…think generations to come as they are typically heirloom treasures that most people will fight over. Many people know the value of a well seasoned cast iron pot or pan that has been handed down from generation…